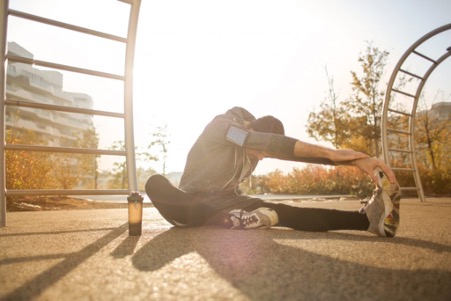 Well, following lockdown, football is finally back on the TV!  I can hear the ‘hoorays’ and the ‘boohoos’ from here.

As I sat down and watched one of the first returning Premier League games, I couldn’t help but notice the number of injuries! In just over 20 minutes, two players were straight off with muscle damage, which is what prompted me to write this article.

The injuries were nothing unusual – a rolled ankle and a hamstring strain – two problems that I often see and treat in the clinic. Although common, hamstring injuries are complex and far from straightforward. It’s not unusual for them to be recurrent and often require professional help, so, whether. a football fan or not, read on to learn more about those troublesome hamstring injuries… Hamstrings are one of the most commonly injured muscles and are frequently seen in football and other sports because approx. 70% of them occur with high speed running. The remaining 30% normally occur with over-stretching movements*.

As shown in the diagram, the hamstring attaches from the ischial tuberosity to the tibia and fibula below the knee and as such spans two joints.

The hamstring is an important muscle for high speed running and acts to extend the hip (move the leg behind you) as you push off the ground as well as decrease knee extension during the swing phase and prevent over striding (apologies for the ‘techno babble’ – follow this link for a video which provides a simple explanation:

An example of a hamstring injury

One of the most famous hamstring injuries involved the athlete Derek Redmond, which happened live at the 1992 Barcelona Olympics (https://www.youtube.com/watch?v=t2G8KVzTwfw). Derek bravely finished the race with the aid of his father. The images of Derek and his father live in the memory of many of us as an enduring spirit of the Olympics.

Often there are coordination (the way you move) reasons for hamstring injury which require a detailed analysis of the patient/athlete’s movement to understand where the injury comes from (see here for more detail https://www.youtube.com/watch?v=NOam2MV3Rrg ). This analysis is ideally completed by a physiotherapist, running coach and strength & conditioning professional in a team-based approach. Traditional strength training alone is often not sufficient in preventing hamstring injury recurrence.

Hamstring injuries are classified into:

How do we treat Hamstring injuries?

Well, initially, we call the POLICE…but not to take you away in cuffs!  POLICE is an acronym we use for Protection, Optimal Loading, Ice, Compression and Elevation. Most people in the sport have heard of the acronym RICE for managing acute soft tissue injuries but it has now been replaced with POLICE to encourage us to load soft tissue injuries more appropriately to aid recovery. For a more detailed explanation, see Tom Goom’s article which excellently summarises the original work (https://www.running-physio.com/acute/).

Once over the acute phase of the injury, exercises will be prescribed by your physiotherapist to encourage healing, restore a range of movement and strength, and as pointed out above, work on coordination. Three common exercises started two days post-injury are shown here, on the BJSM website:

I should mention that the players I’ve witnessed go down with hamstring (and other!) injuries in the first few games since the restart of the Premier League could have many reasons to go off injured; it’s probably not at all down to a lack of exercise during lockdown!! Hamstring problems can occur for many reasons and to people of all kinds of fitness levels, so if you need professional help with a hamstring problem, please do get in touch. We’re here to help!

*(Posted on June 27, 2013 by Karim Khan.  Originally posted on Running Physio a handy information resource (for both runners and physios) created by @tomgoom